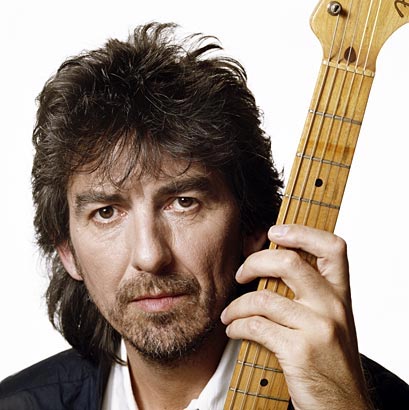 George Harrison was born on February 25, 1943 in Liverpool. After a stint playing with his group the Rebels, George, together with his schoolmate Paul McCartney, joined John Lennon's Quarrymen. He was fifteen at the time, and the stage was set for The Beatles to emerge as the best possible news in post-War Britain.

Over the course of The Beatles' career, Harrison played the role of guitarist, singer and songwriter. His contributions to The Beatles' catalogue include I Need You, Taxman, While My Guitar Gently Weeps, Something and Here Comes the Sun, to name only a few. His lifelong interest in Indian culture advanced considerably through his friendship with Ravi Shankar and affected all of The Beatles and their musical explorations.

In the years immediately following the break-up of The Beatles, George released his first solo album All Things Must Pass to worldwide acclaim, followed by further major recordings, the bulk of which went gold or platinum. One could argue that The Concert for Bangladesh, featuring George's friends Eric Clapton, Bob Dylan, Ravi Shankar, Leon Russell, Ringo Starr, and others, has had the greatest impact. As a response to a world crisis, it was like nothing that the music business had witnessed up to that point and earned a Grammy for Album of the Year in 1973.

In 1987 on the heels of George's top ten album Cloud Nine he formed the Traveling Wilburys with Bob Dylan, Jeff Lynne, Roy Orbison and Tom Petty. Handle with Care was the Wilburys' first single and it caught the world by surprise. The Wilburys would go on to earn a Grammy and are still remembered as the "supergroup" with no equal.

After a life of excursions in the arts and spiritual adventures, George Harrison passed away in 2001. The following year, A Concert for George was organized by Eric Clapton and Olivia Harrison. Filmed at The Royal Albert Hall his former bandmates Paul McCartney and Ringo Starr, Tom Petty and Jeff Lynne created a magical night. The event captured something of the warm and intense impact George had on those fortunate enough to know him well.

His songwriting was powerful enough to generate standards in the field. His love for humour and film turned him, almost inadvertently, into an important movie producer. And, without a doubt, his contribution to The Beatles left an indelible mark on that band's music and character&mdash;we hear it still.