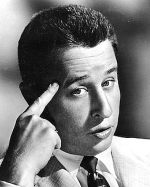 George Leslie Gobel was an American comedian and actor. He was best known as the star of his own weekly NBC television show, The George Gobel Show, which ran from 1954 to 1960. He was born George Leslie Goebel in Chicago, Illinois, His father, Hermann Goebel, was a butcher and grocer who had emigrated to the United States with his parents in the 1890s from the Austrian Empire. His mother, Lillian Goebel, was born in Illinois to immigrant parents from Scotland. He was an only child.

Gobel graduated from Theodore Roosevelt High School in 1937. Initially a country music singer, he appeared on the National Barn Dance on WLS radio. Gobel enlisted in the United States Army Air Forces during World War II and served as a flight instructor in AT-9 aircraft at Altus, Oklahoma and later in B-26 Marauder bombers at Frederick, Oklahoma. In a 1969 appearance on The Tonight Show with Johnny Carson, Gobel joked about his stateside service, “There was not one Japanese aircraft got past Tulsa.” After his discharge at the end of the war, he switched from singing to comedy.

In 1954 he began a television series on NBC, a comedy show that showcased Gobel’s quiet, homespun style of humor, a low-key alternative to what audiences had seen on Milton Berle’s shows. A huge success, the popular series made the crewcut Gobel one of the biggest comedy stars of the 1950s.