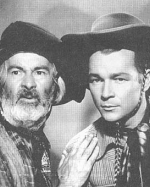 George Francis “Gabby” Hayes was an American radio, film, and television actor. He was best known for his numerous appearances in Western movies as the colorful sidekick to the leading man.

Hayes was born the third of seven children in Wellsville, New York, and did not come from a cowboy background. In fact, he did not know how to ride a horse until he was in his forties and had to learn for movie roles. His father, Clark Hayes, operated a hotel and was also involved in oil production. George Hayes played semi-professional baseball while in high school, then ran away from home in 1902, at 17. He joined a stock company, apparently traveled for a time with a circus, and became a successful vaudevillian. He had become so successful that by 1928 he was able, at 43, to retire to a home on Long Island in Baldwin, New York. He lost all his savings the next year in the 1929 stock-market crash and returned to acting.

Hayes married Olive E. Ireland, daughter of a New Jersey glass finisher, on March 4, 1914. She joined him in vaudeville, performing under the name Dorothy Earle. She convinced him in 1929 to try his luck in motion pictures, and the couple moved to Los Angeles. They remained together until her death July 5, 1957. The couple had no children.

On his move to Los Angeles, according to later interviews, Hayes had a chance meeting with producer Trem Carr, who liked his look and gave him thirty roles over the next six years. In his early career, Hayes was cast in a variety of roles, including villains, and occasionally played two roles in a single film. He found a niche in the growing genre of western films, many of which were series with recurring characters. Ironically, Hayes would admit he had never been a big fan of westerns.