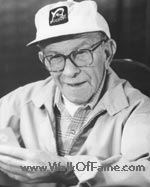 His career spanned vaudeville, film, radio, and television, with and without his wife, Gracie Allen. His arched eyebrow and cigar smoke punctuation became familiar trademarks for over three quarters of a century. Beginning at the age of 79, George enjoyed a career resurrection as an amiable, beloved and unusually active old comedian, continuing to work until shortly before his death, in 1996, at the age of 100.

Nathan Birnbaum was the ninth of twelve children born to Louis and Dorothy Birnbaum in New York City. His father was a substitute cantor at the local synagogue but did not work very often. During the influenza epidemic of 1903, Louis contracted the flu and died. Nattie started working in 1903 after his father's death, shining shoes, running errands, and selling newspapers.

When he landed a job as a syrup maker in a local candy shop at the age of seven, Nattie Birnbaum was discovered, as he recalled many years later: 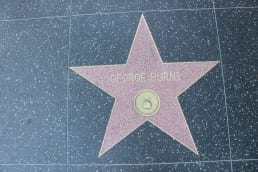