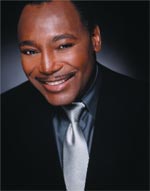 George Benson is a multi Grammy Award winning American musician, whose recording career began at the age of twenty-one as a jazz guitarist. He is also known as a pop, R&B, and scat singer. This one-time child prodigy topped the Billboard 200 in 1976 with the triple-platinum album, Breezin‘. He was also a major live attraction in the UK during the 1980s. Benson uses a rest-stroke picking technique similar to that of gypsy jazz players such as Django Reinhardt.

Benson was born and raised in the Hill District in Pittsburgh, Pennsylvania. At the age of 7, Benson first played the ukulele in a corner drug store for which he was paid a few dollars; at the age of 8, he was playing guitar in an unlicensed nightclub on Friday and Saturday nights which was soon closed down by the police. At the age of 10, George recorded his first single record with RCA-Victor in New York, called ‘She Makes Me Mad’.

Benson attended the Connelly High School although he left before graduation. As a youth, instead, he learned how to play straight-ahead instrumental jazz during a relationship performing for several years with organist Jack McDuff. At the age of 21, he recorded his first album as leader, The New Boss Guitar, featuring McDuff. Benson’s next recording was It’s Uptown with the George Benson Quartet including Lonnie Smith on organ and Ronnie Cuber on baritone saxophone. Benson followed it up with The George Benson Cookbook, also with Lonnie Smith and Ronnie Cuber on baritone and drummer Marion Booker.

Miles Davis employed Benson in the mid 1960s, featuring his guitar on “Paraphernalia” on his 1968 Columbia release, Miles in the Sky. Benson went to Verve Records afterwards. Then, he signed with CTI Records, where he recorded numerous albums with jazz heavyweights guesting to limited financial success. Benson also did a version of The Beatles’s 1969 album Abbey Road called The Other Side of Abbey Road, also released in 1969, and a version of “White Rabbit”, originally written and recorded by San Francisco rock group Jefferson Airplane, around this time.