About
George A. Romero

The Late George A. Romero, Godfather of the Modern Zombie Film Genre,
Honored With Posthumous Star on the Walk Of Fame

Watch the star ceremony as the Hollywood Chamber immortalizes George A. Romero below

The Hollywood Chamber of Commerce proudly honored filmmaker George A. Romero posthumously with the 2,621st star on the Hollywood Walk of Fame today, Wednesday, October 25, 2017 at 11:30 a.m. PDT. The star was dedicated in the category of Motion Pictures at 6604 Hollywood Boulevardin front the Hollywood Toys & Costumes Store.

“The fact that fans nominated Mr. Romero for the Walk of Fame star speaks volumes of how loved he was for his work in the horror film genre and for being the person he was. Fortunately, prior to his passing he learned that he was selected for a star, and we are saddened that he won’t be here with us for his special day,” stated Ana Martinez, Producer of the Walk of Fame.

Born on Feb. 4, 1940 in New York City, Romero became interested in filmmaking at a young age when he borrowed an 8mm camera from a wealthy uncle. Inspired by Michael Powell and Emeric Pressburger’s musical opera, “Tales of Hoffmann” (1951), Romero began making his own short films and was arrested at 14 years old after he threw a flaming dummy off the roof of a building while making “Man from the Meteor” (1954). While attending Suffield Academy in Connecticut, Romero made two 8mm shorts, “Gorilla” (1956) and “Earth Bottom” (1956); the latter being a geology documentary that won him a Future Scientists of America award. After graduating high school, he attended Carnegie-Mellon University in Pittsburgh, PA where he earned his Bachelor’s in Art, Theater and Design in 1960. Romero continued making shorts such as “Curly” (1958) and graduated to 16mm films with “Slant” (1958), both of which he made with sometime collaborator Rudolph Ricci. Following work as a grip on Alfred Hitchcock's “North by Northwest” (1958), Romero shot the feature-length “Expostulations” (1962), a satirical anthology of loosely-connected shorts that showed hints of his later social consciousness.

After forming the commercial and industrial production company, Latent Image, in 1963, Romero cobbled together $114,000 in order to direct his first feature film, “Night of the Flesh Eaters.” Renamed “Night of the Living Dead” (1968) after landing a distributor, the unrelenting film – which was criticized at the time for its onscreen excesses – became a landmark cult film and significant social barometer that forever changed the horror genre. With no heroes or redemptive meaning – only unstoppable nihilistic evil rampaging through small town America – the movie popularized the zombie apocalypse subgenre of horror, spawning numerous imitators throughout the ensuing decades. Though decidedly cheap in production values, “Night of the Living Dead” nonetheless stood the test of time as an innovative cult film that attracted new fans every generation and became Romero’s signature work.

Romero’s other films include: “Season of the Witch,” “The Crazies, “Knight Riders,” “Creep Show,” “Monkey Shines: An Experiment in Fear,” “Two Evil Eyes.”

Romero secured his cult status with two remarkable films: “Martin” and “Dawn of the Dead”.   He later went on to write “Day of the Dead, the ostensible conclusion to the “Living Dead” trilogy which emerged as one Romero’s strongest horror films to date.

Romero also worked in television as the creator, co-executive producer and occasional writer of “Tales from the Dark Side.”  Romero teamed up with Stephen King again for his adaptation of King’s novel, “The Dark Half.”

In 2004, Romero returned to familiar territory with “Land of the Dead,” a continuation of his zombie franchise long thought to be finished with “Day of the Dead.” This time, however, Romero increased the energy with a fast-paced actioner that was not shy on the gore and violence, pleasing both fans and the uninitiated. “Land of the Dead” ended up being one of the best reviewed films of the 2005 summer! He continued his zombie revitalization with “Diary of the Dead,” which was more of a reboot than a sequel to the other four movies in the “Dead” series. He then made the sixth in the series, “Survival of the Dead” (2010), which saw the inhabitants of an isolated island off the coast of North America conflicted whether to kill their own relatives rising from the grave, or try to find a cure. Romero’s “Dead” films continue to inspire such hits as “Shaun of the Dead” (2004) and “Zombieland” (2009).

In 2013, Romero’s “Empire of the Dead” was announced by Marvel Comics. It was a 15-issue limited comic book series which began publication in 2014, and ended in late 2015. “Empire” features zombies similar to those in his “Living Dead” film series, but differs slightly because vampires are also part of the story.

Dubbed the “Godfather of Zombie Films,” George A. Romero was a pivotal figure in the development of the contemporary horror film and the progenitor of the zombie apocalypse subgenre.

Filmmakers who consider Romero as one of their influences include Frank Darabont, Guillermo Del Toro, Robert Rodriguez and Quentin Tarantino to name just few!

Sadly, Romero passed away on July 16, 2017 from a brief, but aggressive battle with lung cancer. He slipped away listening to the score of “The Quiet Man,” one of his all-time favorite films, with his family by his side. He leaves behind a filmmaking legacy that has endured, and will continue to endure, the test of time!

Prospect House Entertainment in association with Glendale Arts and Chris roe Management will present a George A. Romeo tribute and Memorial at the Alex Theatre tonight. 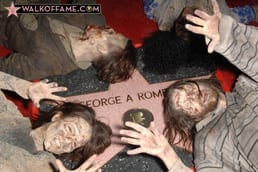