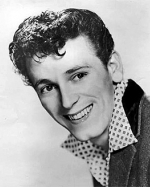 Vincent Eugene Craddock, better known as Gene Vincent, was an American musician who pioneered the styles of rock and roll and rockabilly. His 1956 top ten hit with his Blue Caps, “Be-Bop-A-Lula”, is considered a significant early example of rockabilly. He is a member of the Rock and Roll and Rockabilly Halls of Fame.

Vincent Eugene Craddock was born in Norfolk, Virginia, on February 11, 1935. His early musical influences included country, rhythm and blues and gospel music. He showed his first real interest in music while his family lived in Munden Point, Virginia, near the North Carolina line, where they ran a country store. He received his first guitar as a gift from a friend at the age of 12.

Having spent his youth in the Norfolk area, Craddock decided to pursue the life of a sailor. He dropped out of school at age 17 and enlisted in the U.S. Navy in 1952. Craddock’s parents signed the required forms allowing him to join the Navy. He completed basic training and joined the fleet as a crewman aboard the fleet oiler USS Chukawan, although he did spend a two week training period on the repair ship USS Amphion before returning to the Chukawan. He proved to be a good sailor while deployed at sea, but gained a reputation as a trouble-maker while on liberty ashore. Craddock never saw combat, but completed a Korean War deployment. He sailed home from Korean waters aboard battleship USS Wisconsin, but was not part of the ship’s company.