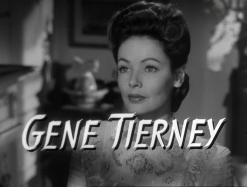 Gene Eliza Tierney was an American film and stage actress. Acclaimed as one of the great beauties of her day, she is best-remembered for her performance in the title role of Laura and her Academy Award-nominated performance for Best Actress in Leave Her to Heaven. Other notable roles include Martha Strable Van Cleve in Heaven Can Wait, Isabel Bradley Maturin in The Razor’s Edge, Lucy Muir in The Ghost and Mrs. Muir, Ann Sutton in Whirlpool, Maggie Carleton McNulty in The Mating Season and Anne Scott in The Left Hand of God. Certain of her film-related material and personal papers are contained in the Wesleyan University Cinema Archives, to which scholars and media experts from around the world may have full access.

Tierney was born in Brooklyn, New York, the daughter of Howard Sherwood Tierney and Belle Lavina Taylor. She had an elder brother, Howard Sherwood ?Butch? Tierney, Jr., and a younger sister, Patricia ?Pat? Tierney. Her father was a prosperous insurance broker of Irish descent, her mother a former gym teacher.

Tierney attended St. Margaret?s School in Waterbury, Connecticut, and the Unquowa School in Bridgeport, Connecticut. Her first poem, entitled ?Night,? was published in the school magazine, and writing verse became an occasional pastime during the rest of her life. She then spent two years in Europe and attended the Brillantmont finishing school in Lausanne, Switzerland, where she learned to speak fluent French.

Tierney returned to the U.S. in 1938 and attended Miss Porter’s School. On a trip to the West Coast, she visited Warner Bros. studios. The director Anatole Litvak, who was so taken by the seventeen-year-old?s beauty, told her that she should become an actress. Warner Bros. wanted to sign her to a contract, but her parents advised against it because of the low salary.