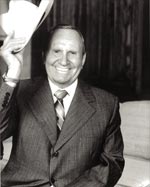 Orvon Eugene Autry, better known as Gene Autry, was an American performer who gained fame as The Singing Cowboy on the radio, in movies and on television for more than three decades beginning in the 1930s. Autry was also owner of the Los Angeles/California Angels Major League Baseball team from 1961 to 1997, as well as a television station and several radio stations in southern California.

Although his signature song was "Back in the Saddle Again", Autry is best known today for his Christmas holiday songs, "Here Comes Santa Claus", "Frosty the Snowman", and his biggest hit, "Rudolph the Red-Nosed Reindeer".

He is a member of both the Country Music and Nashville Songwriters halls of fame, and is the only celebrity to have five stars on the Hollywood Walk of Fame.

Autry, the grandson of a Methodist preacher, was born near Tioga, Texas. His parents, Delbert Autry and Elnora Ozment, moved to Ravia, Oklahoma in the 1920s. He worked on his father's ranch while at school. After leaving high school in 1925, Autry worked as a telegrapher for the St. Louis?San Francisco Railway. 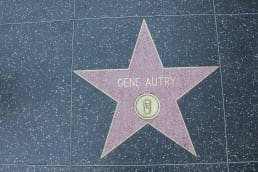