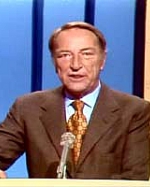 Garry Moore was an American entertainer, game show host and comedian best known for his work in television. Born Thomas Garrison Morfit , Moore entered show business as a radio personality in the 1940s and was a television host on several game and variety show programs during the 1950s, 1960s, and 1970s.

After dropping out of high school, Moore found success as a radio host and then moved on to the television industry. He hosted The Garry Moore Show, and the game shows I’ve Got a Secret and To Tell the Truth. He became known for his bow ties and his crew cut, though he refrained from both fashions later in his career.

After being diagnosed with throat cancer in 1976, Moore retired from the television industry, making a few rare television appearances. He spent the last years of his life in South Carolina and at his summer home in Maine. He died on November 28, 1993.

Moore was born Thomas Garrison Morfit on January 31, 1915, in Baltimore, Maryland, the son of Mason P. Morfit and Mary L. Morfit. He attended Baltimore City College but dropped out to pursue a career in radio and writing. Starting in 1937, he worked for Baltimore radio station WBAL as an announcer, writer, and actor/comedian. He used his birth name until 1940, when, while on the air hosting Club Matinee at NBC, Chicago, he held a radio contest to find a more easily pronounceable one. “Garry Moore” was the winning entry, which was submitted by a woman from Pittsburgh who received a prize of $100. It was on Club Matinee where he met his long-time friend and broadcasting partner, Durward Kirby. In the years that followed, Moore appeared on numerous network radio shows. He started out as an announcer and then as support for broadcast personalities, one of whom was Jimmy Durante. From 1943&ndash;1947, Durante and Moore had a joint show, with Moore as the straight man. Impressed with his ability to interact with audiences, CBS offered him his own show. Starting in 1949, the one-hour daytime variety show The Garry Moore Show aired on CBS. Moore briefly returned to radio as host of NBC’s “Monitor” in 1969.