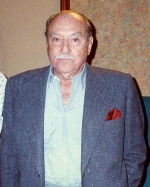 the son of British actress and her vaudevillian husband Charles Aldrich, Gale Gordon’s first big radio break came via the recurring roles of “Mayor La Trivia” and “Foggy Williams” on Fibber McGee and Molly, before playing Rumson Bullard on the show’s successful spinoff, The Great Gildersleeve. Gordon and his character of Mayor La Trivia briefly left the show in December of 1942; both had enlisted in World War II.

Gordon was the first actor to play the role of Flash Gordon, in the 1935 radio serial The Amazing Interplanetary Adventures of Flash Gordon. In 1949 Gordon recorded the pilot for The Halls of Ivy, starring in the program’s title role of Dr. Todhunter Hall, the president of Ivy College. The pilot led to a radio series that aired from 1950-52, but with Ronald Colman in the title role; Gordon later joined the cast as a replacement for Willard Waterman in the popular role of John Merriweather.