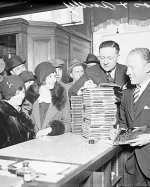 Freeman Fisher “Gozzie” Gosden was an American radio comedian, and pioneer in the development of the situation comedy form. He is best known for his work in the Amos ‘n’ Andy series.

Freeman Gosden was born in Richmond, Virginia. During World War I he served in the United States Navy as a wireless operator, which prompted his great interest in the young medium of radio. While attending school in Richmond, Gozzie worked part time in Tarrant’s Drug Store at 1 West Broad Street.

In 1921 Gosden first teamed up with Charles Correll to do radio work, presenting comedy acts, sketches, and hosting variety shows. They met in Durham, North Carolina, both working for the Joe Bren Producing Company. Their first regular show came in 1925 with their WEBH Chicago show Correll and Gosden, the Life of the Party. On this show the two told jokes, sang, and played music. In 1926 Gosden and Correll had a hit with their radio show Sam & Henry on Chicago radio station WGN. Sam & Henry is considered by some historians to have been the first situation comedy.