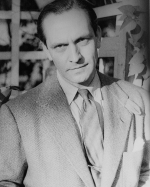 Fredric March was an American stage and film actor. He won the Academy Award for Best Actor in 1932 for Dr. Jekyll and Mr. Hyde and in 1946 for The Best Years of Our Lives.

March was born Ernest Frederick McIntyre Bickel in Racine, Wisconsin, the son of Cora Brown, a schoolteacher, and John F. Bickel, a devout

Presbyterian Church elder who worked in the wholesale hardware business. March attended the Winslow Elementary School, Racine High School, and the University of Wisconsin?Madison where he was a member of Alpha Delta Phi. He began a career as a banker, but an emergency appendectomy caused him to reevaluate his life, and in 1920 he began working as an extra in movies made in New York City, using a shortened form of his mother’s maiden name, Marcher. He appeared on Broadway in 1926, and by the end of the decade signed a film contract with Paramount Pictures.

March received an Oscar nomination in 1930 for The Royal Family of Broadway, in which he played a role based upon John Barrymore. He won the Academy Award for Best Actor in 1932 for Dr. Jekyll and Mr. Hyde, leading to a series of classic films based on stage hits and classic novels like Design for Living, Death Takes a Holiday, Les Misérables, Anthony Adverse, and as the original Norman Maine in A Star is Born, for which he received his third Oscar nomination.