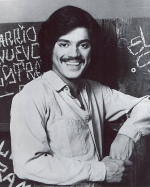 Freddie Prinze was an American actor and stand-up comedian. He was best known as the star of Chico and the Man. He was the father of actor Freddie Prinze, Jr.

Prinze was born Frederick Karl Pruetzel at St. Clair’s Hospital in New York City, the son of Maria Pruetzel Graniela and Edward Karl Pruetzel. His mother was Puerto Rican, and his father, a Hungarian of Lutheran and Jewish backgrounds, immigrated to the U.S. from Germany in 1934. He self identified as Puerto Rican, and for comedic purposes called himself a Hunga Rican.

Prinze was raised in a predominately Hispanic neighborhood in Washington Heights, New York City. He began his education at a private Lutheran school, in a religious compromise by his parents. When Prinze was a small child, his mother enrolled him in ballet classes to deal with his weight problem. Without telling his parents, Prinze successfully auditioned for the Fiorello H. LaGuardia High School of Performing Arts, where he was introduced to drama and continued ballet?and where he discovered his gift for comedy while entertaining crowds in the boys restroom. He was also a small time hustler and drug dealer in his neighborhood of 157th Street and Broadway. He dropped out of school in his senior year to become a stand-up comedian.

Prinze worked at several comedy clubs in New York City, including The Improv and Catch a Rising Star where he introduced himself to audiences as a “Hungarican”. For the sake of his budding comedic career, he changed his surname to “Prinze”, which he chose because, according to his friend David Brenner, he originally wanted to be known as the King of comedy, but Alan King already had that last name, so he would be the Prince of comedy instead.