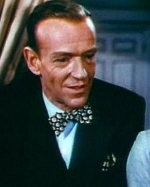 Fred Astaire, born Frederick Austerlitz, was an American film and Broadway stage dancer, choreographer, singer and actor. His stage and subsequent film career spanned a total of 76 years, during which he made 31 musical films. He was named the fifth Greatest Male Star of All Time by the American Film Institute. He is particularly associated with Ginger Rogers, with whom he made ten films.

According to another major innovator in filmed dance, Gene Kelly, “The history of dance on film begins with Astaire.” Beyond film and television, many classical dancers and choreographers, Rudolf Nureyev, Michael Jackson, Mikhail Baryshnikov, and Jerome Robbins among them, also acknowledged his importance and influence.

Astaire was born in Omaha, Nebraska, the son of Johanna “Ann” and Frederic “Fritz” Austerlitz. Astaire’s mother was born in the United States to Lutheran German immigrants from East Prussia and Alsace, while Astaire’s father was born in Linz, Austria, to Jewish parents who had converted to Catholicism.

After arriving in New York City at age 24 on October 26, 1892, and being processed at Ellis Island, Astaire’s father, hoping to find work in his brewing trade, moved to Omaha, Nebraska, and landed a job with the Storz Brewing Company. Astaire’s mother dreamed of escaping Omaha by virtue of her children’s talents after Adele Astaire early on revealed herself to be an instinctive dancer and singer. She planned a “brother-and-sister act,” which was common in vaudeville at the time. Although Astaire refused dance lessons at first, he easily mimicked his older sister’s step and took up piano, accordion, and clarinet.