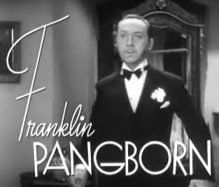 Franklin Pangborn was an American comedic character actor. Pangborn was famous for small, but memorable roles, with a comic flair. He appeared in many Preston Sturges movies as well as the W.C. Fields films International House, The Bank Dick, and Never Give a Sucker an Even Break. For his contributions to motion pictures, Pangborn has a star on the Hollywood Walk of Fame at 1500 Vine Street.

Pangborn was born in New Jersey. In the early 1930s, he worked in short subjects for Mack Sennett, Hal Roach, Universal Pictures, Columbia Pictures, and Pathe, almost always in support of the leading players. He also appeared in dozens upon dozens of feature films in small roles, cameos, and in recurring gags of various types.

One of those character actors who always played essentially the same character no matter the situation, Pangborn portrayed a fussy type of person, polite, elegant, and highly energetic, often officious, fastidious, somewhat nervous, prone to becoming flustered but essentially upbeat, and with an immediately recognizable high-speed patter-type speech pattern. He typically played an officious desk clerk in a hotel, a self-important musician, a fastidious headwaiter, an enthusiastic birdwatcher, and the like, and was usually put in a situation of frustration or was comedically flustered by someone else’s topsy-turvy antics.

Pangborn’s screen character, which might be described at times as prissy or flighty, was often considered a gay stereotype, although such a topic was too sensitive in his day to be discussed overtly in the dialogue. A rare exception occurred in International House, which was filmed before the Hays Office fully censored filmmaking, and was notable for several risqué references. In this scene, Fields has just arrived by autogyro at the titular hotel in the fictitious Chinese city called “Wu Hu”, but he does not know for sure where he is. Pangborn is the hotel manager: