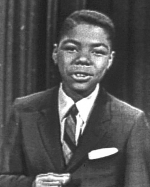 Franklin Joseph “Frankie” Lymon was an American rock and roll/rhythm and blues singer and songwriter, best known as the boy soprano lead singer of a New York City-based early rock and roll group, The Teenagers. The group was composed of five boys, all in their early to mid teens. The original lineup of the Teenagers, an integrated group, included three African American members, Frankie Lymon, Jimmy Merchant and Sherman Garnes, and two Puerto Rican members, Herman Santiago and Joe Negroni.

The Teenagers’ first single, 1956’s “Why Do Fools Fall in Love”, was also their biggest hit. After Lymon went solo in mid-1957, both his career and those of the Teenagers fell into decline. By age 25, he was found dead in his grandmother’s bathroom from a heroin overdose. His life inspired the 1998 film, Why Do Fools Fall In Love?.

Frankie Lymon was born in Harlem to a truck driver father and a mother who worked as a maid. Lymon’s father, Howard Lymon, also sang in a gospel group known as the Harlemaires; Frankie Lymon and his brothers Lewis and Howie sang with the Harlemaire Juniors. The Lymon family struggled to make ends meet, and Lymon began working as a grocery boy at age ten, augmenting his legitimate income with proceeds gained from hustling prostitutes and was known for having relationships with women twice his age.

At the age of 12, Lymon heard a local doo-wop group known as the Coupe De Villes at a school talent show. He befriended their lead singer, Herman Santiago, and he eventually became a member of the group, now calling itself both The Ermines and The Premiers. Dennis Jackson of Columbus, Georgia was one of the main influences of Lymon’s life. His personal donation of $500 helped start Frankie’s career.