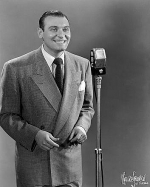 Frankie Laine, born Francesco Paolo LoVecchio, was a successful American singer, songwriter and actor whose career spanned 75 years, from his first concerts in 1930 with a marathon dance company to his final performance of “That’s My Desire” in 2005. Often billed as America’s Number One Song Stylist, his other nicknames include Mr. Rhythm, Old Leather Lungs, and Mr. Steel Tonsils. His hits included “That’s My Desire”, “That Lucky Old Sun”, “Mule Train”, “Cry of the Wild Goose”, “Jezebel”, “High Noon”, “I Believe”, “Hey Joe!”, “The Kid’s Last Fight”, “Cool Water”, “Moonlight Gambler”, “Love is a Golden Ring”, “Rawhide”, and “Lord, You Gave Me a Mountain”.

He sang well-known theme songs for many movie Western soundtracks, including 3:10 To Yuma, Gunfight at the O.K. Corral, and Blazing Saddles, although he was not a country & western singer. Laine sang an eclectic variety of song styles and genres, stretching from big band crooning to pop, western-themed songs, gospel, rock, folk, jazz and blues. He did not sing the soundtrack song for High Noon, which was sung by Tex Ritter, but his own version was the one that became a bigger hit.

A clarion-voiced singer with lots of style, able to fill halls without a microphone, and one of the biggest hit-makers of late 1940s/early 1950s, Laine had more than 70 charted records, 21 gold records, and worldwide sales of over 100 million records. Originally a rhythm and blues influenced jazz singer, Laine excelled at virtually every music style, eventually expanding to such varied genres as popular standards, gospel, folk, country, western/Americana, rock ‘n’ roll, and the occasional novelty number. He was also known as Mr Rhythm for his driving jazzy style.

Laine was the first and biggest of a new breed of black-influenced singers who rose to prominence in the post-World War II era. This new, raw, emotionally charged style seemed at the time to signal the end of the previous era’s singing styles; and was, indeed, a harbinger of the rock ‘n’ roll music that was to come. As music historian Jonny Whiteside wrote: