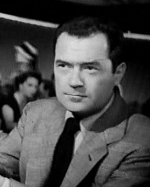 Frank Lovejoy was an American actor in radio, film, and television. He was born Frank Lovejoy Jr. in the Bronx, New York, but grew up in New Jersey. His father, Frank Lovejoy Sr., was a furniture salesman from Maine. His mother, Nora, was born in Massachusetts to Irish immigrant parents.

In films of the 1940s and 1950s, Lovejoy mostly played supporting roles. Appearing in movies such as Goodbye, My Fancy with Joan Crawford, Lovejoy was effective playing the movie’s everyman in extraordinary situations. He was in several war movies, notably Joseph H. Lewis’ Retreat, Hell! which portrayed the United States Marine Corps’ retreat from the Chosin Reservoir during the Korean War. In 1951, he had the title role in I Was a Communist for the FBI with co-stars Ron Hagerthy, Paul Picerni, and Philip Carey.

Lovejoy starred in two short-run TV series, Man Against Crime and Meet McGraw. Episodes of these two series have never been released commercially on DVD or VHS and never aired on reruns. Meet McGraw episodes were screened at the Mid-Atlantic Nostalgia Convention.