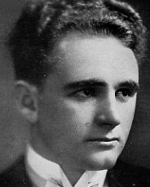 Frank Borzage was an American film director and actor.

Frank Borzage’s father, Luigi Borzaga, was born in Roncone, Austria-Hungary in 1859. As a stone mason, he sometimes worked in Switzerland; he met his future wife, Maria Ruegg, where she worked in a silk factory. Borzaga emigrated to Hazleton, Pennsylvania in the early 1880s where he worked as a coal miner. He brought his fiancee to the United States and they married in Hazleton in 1883.

Their first child, Henry, was born in 1885. The Borzaga family moved to Salt Lake City, Utah, where Frank Borzage was born, and the family remained based until 1919. The couple had fourteen children, eight of whom survived childhood: Henry, Mary, Bill, Frank, Daniel, Lew, Dolly and Sue. Luigi Borzaga died in Los Angeles in a car accident in 1934; his wife Maria died of cancer in 1947.

In 1912 Frank Borzage found employment as an actor in Hollywood, and remained in the profession until 1917. His directorial debut came in 1915 with his film, The Pitch o’ Chance.