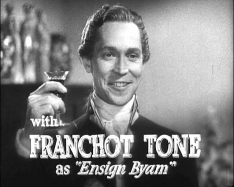 Franchot Tone was an American stage, film, and television actor, star of Mutiny on the Bounty and many other films through the 1960s. In the early 1960s Tone appeared in character roles on popular TV dramas like Bonanza, Wagon Train, The Twilight Zone, and The Alfred Hitchcock Hour.

He was born as Stanislaus Pascal Franchot Tone in Niagara Falls, New York, the youngest son of Dr. Frank Jerome Tone, the wealthy president of the Carborundum Company, and his socially-prominent wife, Gertrude Van Vrancken Franchot. Tone was a distant relative of Wolfe Tone: his great-great-great-great-grandfather John was a first cousin of Peter Tone, whose eldest son was Theobald Wolfe Tone. Tone was of French Canadian, Irish, English and Basque ancestry.

Tone attended Cornell University, where he was President of the drama club and was elected to the Sphinx Head Society. He also joined Alpha Delta Phi fraternity. After graduation, he received an honorary membership to Phi Kappa Psi, and through that organization, the Irving Literary Society. He gave up the family business to pursue an acting career in the theatre. After graduating, he moved to Greenwich Village, New York, and got his first major Broadway role in the 1929 Katharine Cornell production of The Age of Innocence.

The following year, he joined the Theatre Guild and played Curly in their production of Green Grow the Lilacs. He later became a founding member of the famed Group Theatre, together with Harold Clurman, Cheryl Crawford, Lee Strasberg, Stella Adler, Clifford Odets, and others, many of whom had worked with the Theatre Guild. Strasberg had been a castmate of Tone's in Green Grow the Lilacs. These were intense and productive years for him: among the productions of the Group he acted in were 1931 and Success Story . 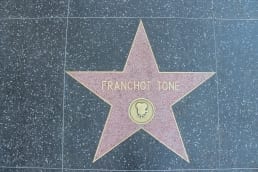