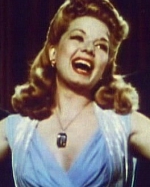 Frances Newbern Langford was an American singer and entertainer who was popular during the Golden Age of Radio and also made film appearances over two decades.

Born Julia Frances Newbern Langford in Lakeland, Florida, she was the daughter of Vasco Cleveland Langford and his wife, Anna Rhea Newbern.

Langford originally trained as an opera singer. While a young girl she required a tonsillectomy that changed her soprano range to a contralto. As a result, she was forced to change her vocal style to a more contemporary big band, popular music style. At age 17, she was singing for local dances. Cigar manufacturer Eli Witt heard her sing at an American Legion party and hired her to sing on his local radio show. While singing for radio during the early 1930s, she was heard by Rudy Vallee, who invited her to become a regular on his radio show. From 1935 until 1938 she was a regular performer on Dick Powell’s radio show. From 1946 to 1951, she performed with Don Ameche on The Bickersons.

With her film debut in Every Night at Eight she introduced what became her signature song: “I’m in the Mood for Love.” She then began appearing frequently in films such as Broadway Melody of 1936, Born to Dance and Yankee Doodle Dandy with James Cagney, in which she performed the popular song “Over There.” In several of these films, such as Broadway Melody, she appeared as herself, as she did in 1953 in The Glenn Miller Story where she sang “Chattanooga Choo Choo” with the Modernaires and the movie orchestra.