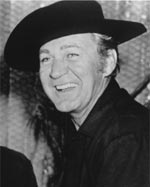 Forrest Tucker was an American actor in both movies and television from the 1940s to the 1980s. Tucker, who stood and weighed, appeared in nearly 100 action films in the 1940s and 1950s.

Forrest Meredith Tucker was born in Plainfield, Indiana, a son of Forrest A. Tucker and his wife Doris Heringlake. He began his performing career at age 14 at the 1933 Chicago World's Fair, pushing the big wicker tourist chairs by day and singing "Throw Money" at night. After his family moved to Washington, D.C., Tucker attracted the attention of Jimmy Lake, the owner of the Old Gaiety Burlesque Theater, by winning its Saturday night amateur contest on consecutive weeks. After his second win, Tucker was hired full time as master of ceremonies at the theatre. However, his initial employment there was short-lived; it was soon discovered that Tucker was underage.

Lying about his age, Tucker then joined the United States Army cavalry. He was stationed at Fort Myer in Virginia, but was discharged when his age became known. He returned to work at the Old Gaiety after his 18th birthday.

When Lake's theatre closed for the summer in 1939, Tucker travelled to California and began auditioning for movie roles. He was cast as Wade Harper in The Westerner, which starred Gary Cooper. He stood out in a fight scene with Cooper and was signed to Columbia Pictures.