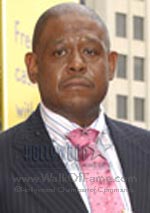 Forest Steven Whitaker is an American actor, producer, and director. He has earned a reputation for intensive character study work for films such as Bird and . However, for his recurring role as ex-LAPD Lieutenant Jon Kavanaugh on the gritty, award-winning television series, The Shield, Whitaker merely had to draw on his childhood years growing up in South Central Los Angeles, California.

Whitaker won an Academy Award for his performance as Ugandan dictator Idi Amin in the 2006 film The Last King of Scotland. Whitaker has also won a Golden Globe, and a BAFTA. He became the fourth black man to win an Academy Award for Best Actor, joining the ranks of Sidney Poitier, Denzel Washington, and Jamie Foxx.

Whitaker was born in Longview, Texas, and his family moved to South Central Los Angeles when he was four. His father, Forest Whitaker, Jr., was an insurance salesman and the son of novelist Forest Whitaker, Sr. His mother, Laura Francis, was a special education teacher who put herself through college and earned two Masters degrees while raising her children. Whitaker has two younger brothers, Kenn and Damon, and an older sister, Deborah.

As a teenager, Whitaker commuted from Carson to wealthy Palisades High School on LA's West Side. There, he was all-league defensive tackle on the football team quarterbacked by Jay Schroeder, a future NFL player. While in high school, he also took voice lessons, performed in musicals, and caught the "acting bug"; his first role as an actor was the lead in Dylan Thomas' play, Under Milk Wood. Whitaker graduated from "Pali High" in 1979.