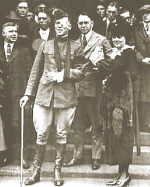 Floyd Phillips Gibbons was the war correspondent for the Chicago Tribune during World War I. One of radio’s first news reporter and commentators he was famous for a fast talking delivery style. Floyd Gibbons lived a life of danger of which he often wrote and spoke.

Gibbons started with the Tribune in 1907. He became well-known for covering the Pancho Villa Expedition in 1916, and for reporting on the 1917 torpedoing of the British ship Laconia, on which he was a passenger.

As a World War I correspondent at the Battle of Belleau Wood, France, Gibbons lost an eye after being hit by German gunfire while attempting to rescue an American soldier.