Florian ZaBach was an American musician and TV personality.

His recording of "The Hot Canary" sold a million copies and reached the top 15 on the Pop charts in 1951. "Believe It or Not" timed his violin performance of "The Flight of the Bumblebee" and wrote, "he plays 12.8 notes per second . faster than any known violinist in history". He hosted a television show in 1954 that was aired in cities around the world.

For his work on television, ZaBach has a star on the Hollywood Walk of Fame at 6505 Hollywood Blvd.

ZaBach was born in Chicago, the son and only child of Florian ZaBach Sr., who played clarinet with the Vienna Philharmonic, and Anna Morganfort-ZaBach. He studied music and learned to play the violin with his father and at the Chicago Cosmopolitan Conservatory of Music. At the age of 12 he debuted with the Chicago Symphony orchestra playing the Mendelssohn concerto. He went to the Prague Conservatory in Czechoslovakia to further his violin studies. 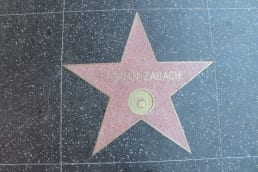