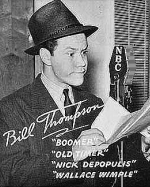 Fibber McGee and Molly was a popular radio show during the era of classic, old-time radio. It was one of the longest-running comedies in the history of classic radio in the United States. The series premiered on NBC in 1935 and remained popular until its demise in 1959, long after radio had ceased to be the dominant form of entertainment in American popular culture.

James “Jim” Jordan and Marian Driscoll, were natives of Peoria, Illinois who met in church and married in 1918. The genesis of Fibber McGee and Molly occurred when the small-time husband-and-wife vaudevillians began their third year as Chicago-area radio performers. Two of the shows they did for station WENR beginning in 1927, both written by Harry Lawrence, bore traces of what was to come and rank as one of the earliest forms of situation comedy. In their Luke and Mirandy farm-report program, Jim played a farmer who was given to tall tales and face-saving lies for comic effect. In a weekly comedy, The Smith Family, Marian’s character was an Irish wife of an American police officer. These characterizations, plus the Jordans’ change from being singers/musicians to comic actors, pointed toward their future.

The Jordans teamed with Donald Quinn, an unemployed cartoonist the couple hired as their writer in 1931. For station WMAQ in Chicago, beginning in April 1931, the trio created Smackout, a 15-minute daily program which centered on a general store and its proprietor, Luke Grey, a storekeeper with a penchant for tall tales and a perpetual dearth of whatever his customers wanted: He always seemed “smack out of it.” Marian Jordan portrayed both a lady named Marian and a little girl named Teeny, as well as playing musical accompaniment on piano. Smackout was picked up for national airing by the National Broadcasting Company in April 1933, and the show endured until August 1935.

A member of the S.C. Johnson company’s owners, Henrietta Johnson Lewis, married to the advertising executive who handled the Johnson’s Wax account, recommended that her husband, John, give the show a chance as a national program for the company.