Antoine Dominique "Fats" Domino is an American R&B and rock and roll pianist and singer-songwriter. He was born and raised in New Orleans, Louisiana.

Domino first attracted national attention with "The Fat Man" in 1949 on Imperial Records. This song is an early rock and roll record, featuring a rolling piano and Domino doing "wah-wah" vocalizing over a strong back beat. It sold over a million copies and is widely regarded as the first rock and roll record to do so.

Fats Domino released a series of hit songs with producer and co-writer Dave Bartholomew, saxophonists Herbert Hardesty and Alvin "Red" Tyler and drummer Earl Palmer. Other notable and long-standing musicians in Domino's band were saxophonists Reggie Houston, Lee Allen, and Fred Kemp, Domino's trusted bandleader. Domino finally crossed into the pop mainstream with "Ain't That a Shame", which hit the Top Ten, though Pat Boone characteristically hit #1 with a milder cover of the song that received wider radio airplay in a racially-segregated era. Domino would eventually score 37 Top 40 singles.

Domino's first album, Carry on Rockin', was released under the Imperial imprint, #9009, in November 1955 and subsequently reissued as Rock and Rollin' with Fats Domino in 1956. Combining a number of his hits along with some tracks which had not yet been released as singles, the album went on under its alternate title to reach #17 on the "Pop Albums" chart. 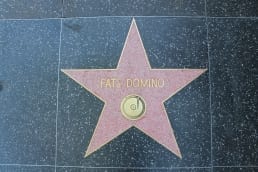