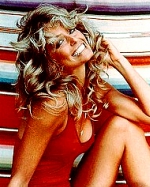 Farrah Fawcett was an American actress and artist. A multiple Golden Globe and Emmy Award nominee, Fawcett rose to international fame when she first appeared as private investigator Jill Munroe in the first season of the TV series Charlie’s Angels, in 1976. Fawcett later appeared off-Broadway to critical approval and in highly rated and critically acclaimed television movies, in roles often challenging and sometimes unsympathetic. Fawcett was a sex symbol whose iconic poster, released the same year Charlie’s Angels premiered, broke sales records, making her an international pop culture icon. Her hair style was emulated by millions of young women in the 1970s and early 1980s.

Ferrah Leni Fawcett was born in Corpus Christi, Texas, the younger of two daughters. Her mother, Pauline Alice, was a homemaker, and her father, James William Fawcett, was an oil field contractor. She was of Irish, French, English and Choctaw Native American ancestry. Fawcett once said the name “Ferrah” was “made up” by her mother because it went well with their last name; she later changed the spelling.

A Roman Catholic, Fawcett’s early education was at the parish school of the church her family attended, St. Patrick’s Roman Catholic Church in Corpus Christi. She graduated from W. B. Ray High School in Corpus Christi in 1965. For three years, 1965?68, Fawcett attended the University of Texas at Austin, living one semester in Jester Center, and became a sister of Delta Delta Delta Sorority. During her sophomore year, she appeared in a photo of the “Ten Most Beautiful Coeds” from the university, which ran in Cashbox magazine. A Hollywood publicist saw the photo, called Fawcett and over the course of a year urged her to move to Los Angeles, which she did the summer following her junior year, with her parents’ permission to “try her luck” in Hollywood over the course of the summer. She did not return.

In the late 1960s and early 1970s, Fawcett appeared in TV commercials for consumer products, starting with her selection as a Breck Girl for Breck Shampoo, and moving on to other products including Noxzema shaving cream, Ultra Brite toothpaste,