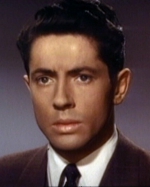 Farley Earle Granger is an American actor. In a career spanning several decades, he perhaps is known best for his two collaborations with Alfred Hitchcock, Rope in 1948 and Strangers on a Train in 1951.

Granger was born in San Jose, California, the son of Eva and Farley Earle Granger.

His wealthy father owned a Willys-Overland automobile dealership, and the family frequently spent time at their beach house in Capitola. Following the stock market crash in 1929, the Grangers were forced to sell both their homes and most of their personal belongings and move into an apartment above the family business, where they remained for the next two years. As a result of this financial setback and the loss of their social status, both of Granger’s parents began to drink heavily. Eventually the remainder of their possessions were sold at auction to settle their debts, and the elder Granger used the last car on his lot to spirit away the family to Los Angeles in the middle of the night.

The family settled in a small apartment in a seedy part of Hollywood, and Granger’s parents worked at various temporary jobs. Their drinking increased, and the couple frequently fought. Hoping he might become a tap dancer, his mother enrolled Granger at Ethel Meglin’s, the dance and drama instruction studio where Judy Garland and Shirley Temple had gotten their starts.