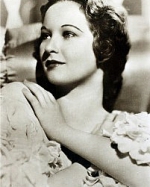 Evelyn Venable was an American actress. In addition to starring in several films in the 1930s and 1940s, she is notable as the voice and model for the Blue Fairy in the Walt Disney’s Pinocchio.

For her work in motion pictures, Venable has a star on the Hollywood Walk of Fame at 1500 Vine Street.

Evelyn Venable was born in Cincinnati, Ohio, the only child of Emerson and Dolores Venable. She graduated from Walnut Hills High School where her father taught English. Her grandfather William Henry Venable also taught English there. She performed in several plays at Walnut Hills, as Juliet in Romeo and Juliet, the Dream Child in Dear Brutus and Rosalind in As You Like It. She attended Vassar College for a short time before returning to the University of Cincinnati. She performed in Walter Hampden’s touring productions, including Roxanne in Cyrano de Bergerac and Ophelia in Hamlet.

During a performance in Los Angeles, she was recognized and offered several film contracts. After initially turning down the offers, she signed a contract with Paramount in 1932. Her contract was unique in that she would not have to cut her hair, pose for leg art, or perform in bit parts. A long-believed apocryphal story sprang up that she was forbidden by her father to engage in any kissing scenes in her films, and although this eventually proved to be false, she indeed does not have any kissing scenes in her most memorable films, not even in Death Takes a Holiday, in which she falls in love with Fredric March, or The Little Colonel, in which she plays Shirley Temple’s mother. She played the lead or second lead in a series of films in the 1930s, and was the original model for the Columbia Pictures logo.