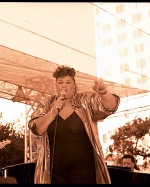 Etta James is an American blues, soul, R&B, rock & roll, gospel and jazz singer and songwriter. James is the winner of four Grammys and seventeen Blues Music Awards. She was inducted into the Rock & Roll Hall of Fame in 1993, the Blues Hall of Fame in 2001, and the Grammy Hall of Fame in both 1999 and 2008. In the 1950s and 1960s, she had her biggest success as a blues and R&B singer. She is best known for performing “At Last”, which has been featured in movies, television shows, commercials, and web-streaming services. James has a contralto vocal range.

Jamesetta Hawkins was born in Los Angeles, California, to an unmarried 14-year-old African American girl, Dorothy Hawkins. She claimed that her mother told her that her father was a white pool player, Rudolf “Minnesota Fats” Wanderone. She received her first professional vocal training at the age of five from James Earle Hines, musical director of the Echoes of Eden choir, at the St. Paul Baptist Church in Los Angeles.

James’ family moved to San Francisco in 1950, where she soon teamed up with two other girls to form a doo-wop singing group. When the girls were 14, band leader Johnny Otis had them audition; they sang an answer to Hank Ballard’s “Work With Me, Annie”, called “Roll With Me Henry.” Otis particularly liked the song and, without her mother’s permission, James and the duo went to Los Angeles in 1954 to record it. The song was recorded under the Modern Records label. By this time, the trio had renamed the song “The Wallflower “. It was released in 1955. James named her vocal group “The Peaches.” Richard Berry, a Los Angeles doo-wop luminary, is featured on some of the group’s records.