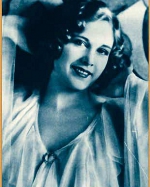 Esther Ralston was an American movie actress whose greatest popularity came during the silent era.

Ralston started as a child actress in a family vaudeville act which was billed as “The Ralston Family with Baby Esther, America’s Youngest Juliet.” From this, she appeared in a few small silent film roles before gaining attention as Mrs. Darling in the 1924 version of Peter Pan.

In the late 1920s she appeared in many films for Paramount, at one point earning as much as $8000 a week, and garnering much popularity, especially in Britain. She appeared mainly in comedies, often portraying spirited society girls, but she also received good reviews for her forays into dramatic roles. In 1962, she had a leading role in the short-lived daytime drama, Our Five Daughters.

Despite making a successful transition to sound, she was reduced to appearing in B-movies by the mid-1930s, leading to her retirement. By the time she settled down in 1941, she had made over 100 movies. During the mid 1950’s as Mrs. Esther Lloyd, a grandmother, she worked in the Seventh Church of Christ Scientist in New York. Happy with her life, Ralston expressed no desire to make a comeback.