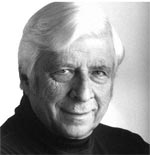 Elmer Bernstein was an American composer and conductor best known for his many film scores. In a career which spanned fifty years, he composed music for hundreds of film and television productions. His most popular works include the scores to The Magnificent Seven, The Ten Commandments, The Great Escape, and To Kill a Mockingbird.

Bernstein was born in New York City, the son of Selma and Edward Bernstein. Although not related to the celebrated composer and conductor Leonard Bernstein, the two were friends. Within the world of professional music, they were distinguished from each other by the use of the nicknames Bernstein West and Bernstein East. During his childhood, Bernstein performed professionally as a dancer and an actor, in the latter case playing the part of Caliban in The Tempest on Broadway, and he also won several prizes for his painting. He gravitated toward music at the age of twelve, at which time he was given a scholarship in piano by Henriette Michelson, a Juilliard teacher who guided him throughout his entire career as a pianist. She took him to play some of his improvisations for composer Aaron Copland, who was encouraging and selected Israel Citkowitz as a teacher for the young boy. Bernstein’s music has some stylistic similarities to Copland’s music, most notably in his western scores and in his spirited score for the 1958 film adaptation of Erskine Caldwell’s novel God’s Little Acre.