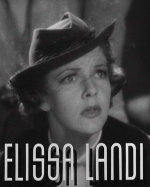 Elissa Landi was an Italian born actress who was popular in Hollywood films of the 1920s and 1930s. Rumoured to be a descendant of Emperor Franz Joseph of Austria, she was noted for her aristocratic bearing.

Born Elisabeth Marie Christine Kühnelt in Venice, Landi was raised in Austria and educated in England.

Her first ambition was to be a writer, and she wrote her first novel at the age of twenty. She would return to writing during lulls in her acting career. She joined the Oxford Repertory Company at an early age, appearing in many British and American stage successes.

During the 1920s she appeared in British, French, and German films before travelling to the United States to appear in a Broadway production of A Farewell to Arms. She was signed to a contact by Fox Film Corporation in 1931.