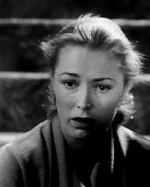 Eleanor Jean Parker is an American screen actress. Her versatile talent led to her being dubbed Woman of a Thousand Faces, the title of her biography by Doug McClelland.

Parker was born in Cedarville, Ohio. At an early age, her family moved to East Cleveland, Ohio and she attended public schools. She is a graduate of Shaw High School. After high school, she was signed by Warner Brothers in 1941, at the age of 18. She would have debuted that year in the film They Died with Their Boots On, but her scenes were cut. Her actual film debut was playing nurse Ryan in Soldiers in White in 1942.

By 1946, she had starred in Between Two Worlds, Hollywood Canteen, Pride of the Marines, Never Say Goodbye, and Of Human Bondage. She broke the champagne bottle on the nose of the California Zephyr train, to mark its inaugural journey from San Francisco, California on March 19, 1949.