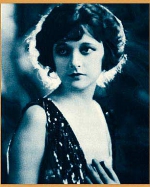 Eleanor Boardman was an American film actress, popular during the era of silent movies.

Born in Philadelphia, Pennsylvania, Boardman was originally on stage but, after temporarily losing her voice, in 1922, she entered silent films. There followed months of fruitless effort until one day Rupert Hughes saw her riding a horse and gave her a part in a film and she quickly began to attract audiences. She was chosen by Goldwyn Pictures as their “New Face of 1922,” through which she signed a contract with the company. After several successful supporting roles, she played the lead in 1923’s Souls for Sale. Her growing popularity was reflected by inclusion on the list of WAMPAS Baby Stars in 1923. She appeared in fewer than forty films during her career, achieving her greatest success in Vidor’s The Crowd in 1928. Her moving performance in that film is widely recognized as one of the outstanding portrayals in American silent films.

Boardman was married to the film director King Vidor, with whom she had two daughters, Antonia and Belinda. Their marriage lasted from 1926 until 1931. Fellow actors John Gilbert and Greta Garbo had planned a double wedding with them, but Garbo broke off the plans at the last minute.

Ms. Boardman’s second husband was Harry d’Abbadie d’Arrast to whom she was married from 1940 until his death in 1968.