Edwin Franko Goldman is one of America's prominent band composers of the early 20th century. He composed over 150 works, more notably his marches. He is known for founding the renowned Goldman Band of New York City and the American Bandmasters Association. Goldman's works are known for their pleasant and catchy tunes, as well as their fine trios and solos. He also encouraged audiences to whistle/hum along to his marches. This has become a tradition with his most famous march "On the Mall".

Goldman was born January 1, 1878, in Louisville, Kentucky, the son of David Henry and Selma Franko Goldman. The family moved to Evansville, Indiana in 1879 and, finally, to Terre Haute, Indiana. His father died in Terre Haute on December 18, 1886, when Goldman was only eight years old, and the following year, Selma and her four children, Edwin, Mayer, Irma and Alfred, moved to New York City. Before her marriage, Goldman's mother was a professional pianist and part of the famous Franko Family, which made its debut at Steinway Hall in New York on September 17, 1869.

At the age of nine, Goldman studied cornet with George Wiegand at the Hebrew Orphan Asylum in New York. In 1892, after winning a scholarship, he attended the National Conservatory of Music, where he studied music theory and played trumpet in the Conservatory orchestra. He also studied under master cornetist Jules Levy.

In 1893 he became a professional trumpet player, performing in such organizations as the Metropolitan Opera House orchestra alongside his uncle Nahan Franko, the orchestra's concertmaster and assistant conductor. 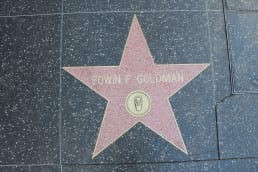