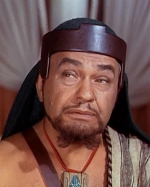 Edward G. Robinson was a Romanian-born American actor. Although he played a wide range of characters, he is best remembered for his roles as a gangster, most notably in his star-making film Little Caesar.

Born as Emanuel Goldenberg to a Yiddish-speaking Romanian-Jewish family in Bucharest, he emigrated with his family to New York City in 1903. He had his Bar Mitzvah at First Romanian-American congregation, and attended Townsend Harris High School and then the City College of New York. An interest in acting led to him winning an American Academy of Dramatic Arts scholarship, after which he changed his name to Edward G. Robinson. Due to age, he could not qualify for military service during WWII.

He began his acting career in 1913 and made his Broadway debut in 1915. He made his film debut in a minor and uncredited role in 1916; in 1923 he made his named debut as E. G. Robinson in The Bright Shawl. One of many actors who saw his career flourish in the new sound film era rather than falter, he made only three films prior to 1930 but left his stage career that year and made 14 films in 1930-1932.

An acclaimed performance as the gangster Caesar Enrico “Rico” Bandello in Little Caesar led to him being typecast as a “tough guy” for much of his early career in works such as Five Star Final, Smart Money, Tiger Shark, Kid Galahad with Bette Davis and Humphrey Bogart, and A Slight Case of Murder and The Amazing Dr. Clitterhouse. In the 1940s, he expanded into psychological dramas including Double Indemnity, The Woman in the Window and Scarlet Street ; but he continued to portray gangsters such as Johnny Rocco in John Huston’s Key Largo, the last of five films he made with Humphrey Bogart.