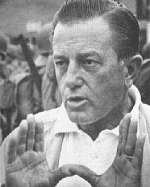 Edward Dmytryk was an American film director who was amongst the Hollywood Ten, a group of blacklisted film industry professionals who served time in prison for being in contempt of Congress during the McCarthy-era ‘red scare’.

Although born in Grand Forks, British Columbia, Canada, Dmytryk grew up in San Francisco when his Ukrainian parents moved to the United States. At the age of 31, he became a naturalized citizen.

His best known films from the pre-McCarthy period of his career were film noirs Crossfire, for which he received a Best Director Oscar nomination, and Murder, My Sweet, the latter an adaptation of Raymond Chandler’s Farewell My Lovely. In addition, he made two World War II films: Hitler’s Children, the story of the Hitler youth and Back to Bataan starring John Wayne.

The late 1940’s was the time of the Second Red Scare, and Dmytryk was one of many filmmakers investigated.