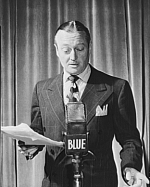 Edmund Dantes Lowe was an American actor. His formative experience began in vaudeville and silent film. He was born in San Jose, California.

Edmund Lowe’s career included over 100 films in which he starred as the leading man. He is best remembered for his role as Sergeant Quirt in the 1926 movie, What Price Glory. Making a smooth transition to talking pictures he remained popular but by the mid 30’s he was no longer a major star although he occasionally played leading man to the likes of Jean Harlow, Mae West, and Claudette Colbert. He remained a valuable supporting actor at the major studios while continuing in leads for such “Poverty Row” studios as Columbia Pictures where his skills could bolster low budget productions. He also starred in the 1950s television show, Front Page Detective and appeared as the elderly lead villain in the first episode of Maverick in 1957.

Lowe was married to Esther Miller until early 1925.

Lowe met Lilyan Tashman while filming Ports of Call. Lowe and Tashman were wed on September 21, 1925. The wedding occurred before the release of the film. The two made their home in Hollywood, in a house thought to have been designed by Tashman.