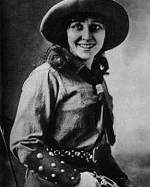 Edith Storey was an American actress during the silent film era, and whose brother, Richard Storey, also had a brief and much less successful film acting career, with him appearing in only four films. She worked for New York-based Vitagraph Studios most of her career except 1910-1911, when she was under contract with Star Film Company in San Antonio, Texas. She appeared in nearly 150 films between 1908 to 1921, including the 1911 film The Immortal Alamo and the 1914 films A Florida Enchantment and The Christian.

Born and raised in New York City, Storey began acting when she was a child. Her film career began with the 1908 film Francesca di Rimini, also called The Two Brothers. She would have two film roles in 1908, and a total of seventy five by 1913. Many of these films were Westerns as Storey was an excellent horseback rider and could perform her own stunts.

She would appear in another seventy one films from 1913 to 1921, almost all of which were what are considered film shorts. In 1921, at the age of only 29, she retired.