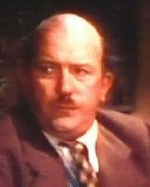 Edgar Livingston Kennedy was an American comedic film actor, known as “the king of the slow burn”. A slow burn is an exasperated facial expression, performed very deliberately; Kennedy embellished this by rubbing his hand over his bald head and across his face, in an attempt to hold his temper. Kennedy is possibly best known today for a small but memorable role as a lemonade vendor in the Marx Brothers film Duck Soup.

A former singer and boxer, Kennedy worked in hundreds of films beginning as a Keystone Cop in 1914. He would go on to work with the biggest film comedians in the United States, including Fatty Arbuckle, Charlie Chaplin, Laurel and Hardy, the Marx Brothers, Charley Chase, and the Our Gang series. Kennedy’s burly frame originally suited him for villainous or threatening roles in silent pictures. By the 1920s Kennedy was working for producer Hal Roach, who kept the actor busy playing supporting roles in short comedies. Kennedy starred in one short, A Pair of Tights, in which he plays a tightwad determined to spend as little as possible on a date. His antics with comedian Stuart Erwin are reminiscent of Roach’s Laurel and Hardy comedies, produced concurrently. Roach also allowed Kennedy to direct, which resulted in about a dozen comedies.

In 1930, Edgar Kennedy was featured by RKO-Pathe in a pair of short-subject comedies, Next Door Neighbors and Help Wanted, Female. Kennedy’s characterization of a short-tempered householder was so effective that RKO built a series around it. The “Average Man” comedies starred Kennedy as a blustery, stubborn guy determined to accomplish a household project or get ahead professionally, despite the meddling of his featherbrained wife, her freeloading brother and his dubious mother-in-law. Kennedy pioneered the kind of domestic situation comedy that later became familiar on television. Each installment would end with Edgar. embarrassed or humbled or defeated, looking at the camera and doing his patented slow burn. The Edgar Kennedy Series, with its theme song “Chopsticks,” became a standard part of the moviegoing experience: Kennedy made six “Average Man” shorts a year for 17 years.

Kennedy became so identified with frustration that practically every studio, large and small, hired him to play hotheads. He often played dumb cops, detectives, and even a prison warden; sometimes he was a grouchy moving man, truck driver, or blue-collar workman. His character usually lost his temper at least once. In Diplomaniacs, Kennedy presides over an international tribunal, where Wheeler & Woolsey want to do something about world peace. “Well, ya can’t do anything about it here,” yells Kennedy, “this is a peace conference!” Kennedy, now established as the poster boy for frustration, even starred in an instructional film titled The Other Fellow, in which loudmouthed roadhog Edgar always vents his anger on other drivers, little realizing that, to them, he is “the other fellow.”