Edward Francis 'Ed' Gardner was an American comic actor, writer and director, best remembered as the creator and star of the radio hit Duffy's Tavern.

Born in Astoria, New York, Gardner was a representative for the J. Walter Thompson advertising agency before going into show business. He began producing for the stage in the early 1930s. He produced the drama play Coastwise on Broadway and wrote and directed the Broadway comedy After Such Pleasures. But he found his fame with Duffy's Tavern, playing the wisecracking, malaprop-prone barkeep Archie on the radio hit. It aired on CBS from 1941 to 1942, on NBC Blue Network from 1942 to 1944 and NBC from 1944 to 1952. Speaking in a nasal Brooklyn accent, and sounding like just about every working class New Yorker his creator had ever known, Gardner as Archie invariably began each week's show by answering the telephone and saying, "Duffy's Tavern, where the elite meet to eat, Archie the manager speaking, Duffy ain't here—oh, hello, Duffy."

Duffy the owner never appeared, but Archie did, with Gardner assuming the role himself after he couldn't find the right actor to play the role. Regulars in the tavern included Duffy's airheaded, man-crazy daughter, Eddie the droll waiter, and Finnegan the barfly, not to mention Clancy the cop. The daughter was played by several actresses but began with Shirley Booth, Gardner's first wife, with whom he remained friends even after their 1942 divorce. 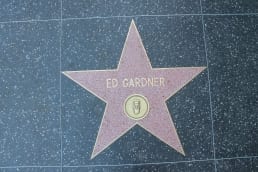