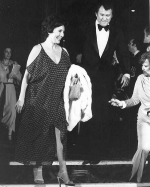 Earl Holliman is an American actor. Earl Holliman was born at Delhi in Richland Parish of northeastern Louisiana, Holliman?s biological father died before he was born, and his biological mother, living in poverty with several other children, gave him up for adoption at birth. Henry Holliman, an oil-field worker, and his wife adopted Earl and his early years were normal until his adoptive father also died when Earl was 13. He saved money from his job ushering at a movie theater and left Shreveport, Louisiana, hitchhiking to Hollywood. Unsuccessful at finding work, he soon returned to Louisiana. Meanwhile, his step mother had remarried, and Holliman disliked his new stepfather. He lied about his age and enlisted in the United States Navy during World War II. Assigned to a Navy communications school in Los Angeles, he spent his free time at the Hollywood Canteen, talking to stars who dropped by to support the servicemen and women. A year after he enlisted, the Navy discovered his real age and discharged him.

Holliman returned home and finished high school. As soon as he was old enough, he reenlisted in the Navy and was stationed in Norfolk, Virginia. Interested in acting, he was cast as the lead in several Norfolk Navy Theatre productions. When he left the Navy for good, Holliman studied acting at the Pasadena Playhouse. He also graduated from the University of California, Los Angeles.

Holliman also became a television personality through his role as Sundance in CBS's Hotel de Paree, with costar Jeanette Nolan, and in the title role with Andrew Prine in NBC's The Wide Country, a drama about modern rodeo performers, which aired for twenty-eight episodes in 1962-1963. In 1962, he and Claude Akins guest starred as feuding brothers in "The Stubborn Stumbos" episode of Marilyn Maxwell's ABC drama series, Bus Stop. In 1967, Holliman guest starred on Wayne Maunder's short-lived ABC military-western series Custer. In 1970 and 1971, Holliman made two appearances in the western comedy Alias Smith and Jones starring Pete Duel and Ben Murphy.