Cannon was born in Tacoma, Washington, the daughter of Claire, a homemaker, and a father who sold life insurance. Cannon was raised in the Jewish faith of her mother, who had immigrated from Russia. She attended West Seattle High School.

Cannon made her screen debut in 1960 in The Rise and Fall of Legs Diamond, however her small screen debut was in the late 1950s including a guest appearance on BAT MASTERSON in 1959 in the episode entitled "Lady Luck". Another role was as Mona Elliott, with fellow guest star Franchot Tone, in the episode "The Man Behind the Man" of the 1964 CBS drama, The Reporter, with Harry Guardino in the title role. She also made appearances on 77 Sunset Strip, the perennial western series Gunsmoke, The Untouchables and the syndicated Two Faces West in the 1960 episode entitled "Sheriff of the Town".

In 1969, Cannon starred with an ensemble cast led by Natalie Wood in Bob & Carol & Ted & Alice, a film about sexual revolution in which she played Alice. She received an Academy Award nomination for Best Supporting Actress for her performance in the film, as well as two Golden Globe nominations. Most of Cannon's later roles in the 1970s were less-successful, although she did receive a Best Actress Golden Globe nomination for Such Good Friends. In addition, she became the first Oscar-nominated actress to be nominated in the Best Short Film, Live Action Category for Number One, a project which Cannon produced, directed, wrote and edited. It was a story about adolescent sexual curiosity. In 1978, Cannon starred in Revenge of the Pink Panther. That same year, she appeared opposite Warren Beatty, Julie Christie and James Mason in Heaven Can Wait. This performance earned her a second Oscar nomination and also won her a Golden Globe Award for Best Supporting Actress. 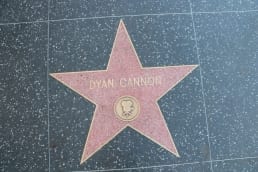