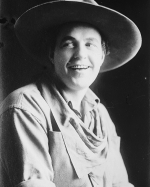 Dustin Lancy Farnum was an American singer, dancer and an actor in silent movies during the early days of motion pictures. After a great success in a number of stage roles, in 1914 he landed his first film role in the movie ‘Soldiers of Fortune’, and later in Cecil B. DeMille’s The Squaw Man. Although he played a wide variety of roles, he tended toward Westerns and became one of the biggest stars of the genre. He was married to actress Winifred Kingston. He was the older brother of actor William Farnum and the lesser known silent film director Marshall Farnum. He also was the father of late radio actress Estelle “Dustine” Runyon.