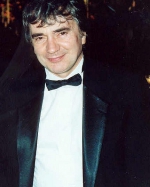 Moore first came to prominence as one of the four writer-performers in Beyond the Fringe in the early 1960s and became famous as half of the popular television double-act he formed with Peter Cook. His fame as a comedic actor was later heightened by his success in Hollywood movies such as 10 with Bo Derek and Arthur in the late 1970s and early 1980s, respectively. He was often known as “Cuddly Dudley” or “The Sex Thimble”, a reference to his short stature and reputation as a ladies’ man.

Moore was born the son of a railway electrician in Charing Cross Hospital, London and brought up in Dagenham. His working class parents showed little affection to their son. He was notably short: and was born with a club foot that required extensive hospital treatment and which, coupled with his diminutive stature, made him the butt of jokes from other children. Seeking refuge from his problems he became a choirboy at the age of six and took up piano and violin. He rapidly developed into a talented pianist and organist and was playing the pipe organ at church weddings by the age of 14. He attended Dagenham County High School where he received musical tuition from a dedicated teacher, Peter Cork. Cork became a friend and confidant to Moore, corresponding with him until 1994.

Moore’s musical talent won him an organ scholarship to Magdalen College, Oxford. While studying music and composition there, he also performed with Alan Bennett in the Oxford Revue. Bennett then recommended him to the producer putting together Beyond the Fringe, a comedy revue, where he was to first meet Peter Cook. Beyond the Fringe was at the forefront of the 1960s satire boom and after success in Britain, it transferred to the United States where it was also a hit.