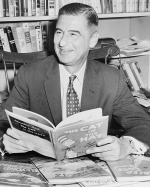 Theodor Seuss Geisel was an American writer and cartoonist most widely known for his children's books written under the pen names Dr. Seuss, Theo. LeSieg and, in one case, Rosetta Stone. He published over 60 children's books, which were often characterized by imaginative characters, rhyme, and frequent use of trisyllabic meter. His most celebrated books include the bestselling Green Eggs and Ham, The Cat in the Hat, One Fish Two Fish Red Fish Blue Fish, Horton Hears a Who!, and How the Grinch Stole Christmas!. Numerous adaptations of his work have been created, including eleven television specials, three feature films, and a Broadway musical

Geisel also worked as an illustrator for advertising campaigns, most notably for Flit and Standard Oil, and as a political cartoonist for PM, a New York City newspaper. During World War II, he worked in an animation department of the U.S Army, where he wrote Design for Death, a film that later won the 1947 Academy Award for Documentary Feature.

Theodor Seuss Geisel was born in Springfield, Massachusetts to Henrietta and Theodor Robert Geisel. His father, the son of German immigrants, inherited the family brewery one month before the start of Prohibition and later supervised Springfield's public park system and zoo. Geisel was raised in the Lutheran faith and remained a member of the denomination his entire life. 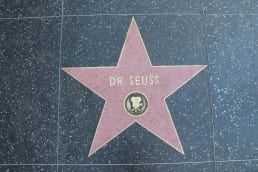