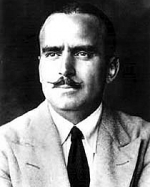 Douglas Fairbanks, Sr. was an American actor, screenwriter, director and producer. He was best known for his swashbuckling roles in silent films such as The Thief of Bagdad, Robin Hood, and The Mark of Zorro. An astute businessman, Fairbanks was a founding member of United Artists. Fairbanks was also a founding member of The Motion Picture Academy and hosted the first Oscars Ceremony in 1929. With his marriage to Mary Pickford in 1920, the couple became Hollywood royalty with Fairbanks constantly referred to as “The King of Hollywood”, a nickname later passed on to actor Clark Gable.

Fairbanks was born Douglas Elton Thomas Ullman in Denver, Colorado, the son of Hezekiah Charles Ullman and Ella Adelaide Marsh. He had a half-brother, John Fairbanks, and a full brother, Robert Payne Ullman. Fairbanks’ father, who was born in Pennsylvania to a Jewish family, was a prominent New York City attorney. His mother, a Roman Catholic, was born in New York, and had previously been married to a man named John Fairbanks until his death. She then married a man named Wilcox, who turned out to be abusive. Her divorce was handled by Ullman, who later became her third husband.

In about 1881, Charles Ullman purchased several mining interests in the Rocky Mountains and moved the family to Denver, where he re-established his law practice. Ullman abandoned the family when Douglas was five years old, and he and Robert were brought up by their mother, who gave them the family name Fairbanks, after her first husband.